Here at St. Ben's our teen faith formation program is based on a discipleship group approach. The parish decided to switch to this style of formation in 2009 and have seen it really transform our youth ministry. Take a minute to read more about this approach and the way Christ's own ministry inspired it.

Beginning in Fall 2020, we decided to join the neighboring parishes in the east side of Duluth to more effectively carry out faith formation with according to this approach.  For more information on the East Duluth Faith Formation CLICK HERE.

In the ancient Jewish world, which is what Jesus grew up in, the Rabbi—or teacher—would have disciples. At the age of 6, young Jewish boys would begin memorizing the first 5 books of the Bible. By the age of 10, they had it fully memorized. From then until they were 15, they memorized the rest of the entire Old Testament! Around the age of 15, they would be tested on their knowledge, and, if they were not good enough, they were kindly encouraged to go home and learn their father’s trade. If, on the other hand, they were accepted and were believed to be able to “make the cut”, these would-be disciples would hear the Rabbi speak one phrase: “Come, follow me.” At that moment, they would begin following their Rabbi. They would stay close behind him from the beginning of morning prayer until the end of evening prayer. They would be training, essentially, to BE that Rabbi. They would learn to walk like him, speak like him, pray like him and believe like him. So much so, that there arose a saying:

“May you be covered in the dust of your Rabbi”

The implication was that, at the end of the day, may you have followed so closely and become so much like your teacher that you will be covered in the dust from his feet. When Jesus began his public ministry at the age of 30, which is when most Rabbis would begin their teaching, he did not accept applications or put an ad out. He walked down to the shore and found men who, judging by the fact that they weren’t following a rabbi already, but were fishing instead, hadn’t “made the cut”. He walked up to one particular fisherman , who we all are quite partial to, and said something he’d never heard spoken to him:

Jesus ministered in both large and small group contexts. 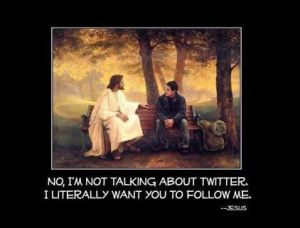 thousands. Both forms of ministry were important. However, Christ’s teaching of the multitudes came as a result of and on the foundation of his time spent with his disciples. They traveled together, shared meals, experienced mutual hardship, and literally lived together. Keep in mind, this was not a formal or academic experience; the small group members simply participated with Christ in whatever He did. They saw and experienced the attitudes and actions He was admonishing others to adopt. The apostles’ small group was their living-learning laboratory. It was with this close-knit group of 12, with 3 being closest, that Christ formed the 72 and sent them out to make disciples. In fact, it is Christ’s Great Commission to them/us in the last verses of the Gospel of Matthew, that give us our direction,

“Go therefore, and make disciples of all nations”

In 2009 Father Eric and Nic Davidson decided to alter the Teen Faith Formation program a bit in order to meet the youths desperate need for both religious education AND relationships, calling it 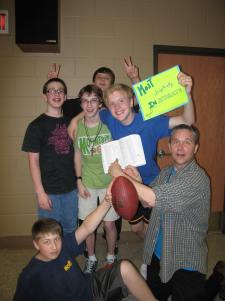 Discipleship Groups. I’m sure you get the meaning behind the title. This approach, which is not only working in parishes across the nation, but has worked since Jesus Christ used it, breaks 43 youth into groups of around 8 each. The desire is to provide the youth with a devoted, caring, very well educated  leader who is available to them and willing to reach into their lives and plant Jesus Christ there.

None of us come to Faith by mere information. A head full of the Catechism, or even sacred Scripture for that matter, is neither an answer OR a pre-requisite. It obviously wasn’t for our Savior. He sought out men who’d failed at the knowledge section of the exam. He found and called people who were hungry for his answer. And he did it personally.

Trust that God loves your youth more than any of us do and has them in mind each moment. Finally, trust that “he who began a good work in [your youth] will be faithful to complete it.” (Philippians 1:6)